My last tri was 2 years ago. However I have been keeping up with training the best my schedule allows. To be exact my last Tri was October 2014. Waterman Half in Maryland.

So in search of a late season tri I sort out to my usual trifind.com search. The choice for a Half Iron was between Williamsburg’s Patriot Half or Narragansett, Rhode Island, FIRMMan Half. Many variables would dictate the choice: weather, travel time, activities pre and post race.

The choice ultimately was FIRMMan. Weather was projected to be 80 degrees as opposed to Williamsburg’s 94. With the little run volume I have accumulated for this season post Sweden marathon and my lack of heat training I know this would be a failed attempt at running the whole race if I did the Patriot Half.

So I signed up to FIRMMan with a week to go. In the three sports my bike training clearly had been the best with 3 sessions a week for the past 12 weeks, namely strength, aerobic and a long session. My run has been minimal due to a chronic knee injury. Swim has been 2 sessions off an on with zero in the last 2 weeks. This race was to be somewhat of a benchmark into my IRONMAN Kalmar, Sweden, training which officially starts in December.

Upon entering Narragansett we saw posters for a calamari cook-off. Huge squid state. This we wouldn’t miss, it was only 5 minutes from the expo. So before packet pickup we attended the calamari cook and yes I tried all the samples from the 9 or so participating vendors. 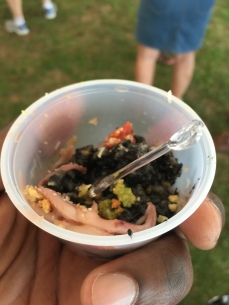 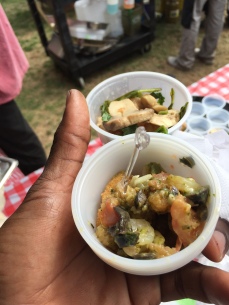 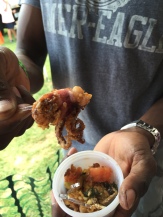 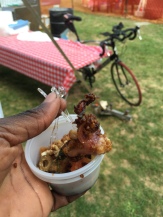 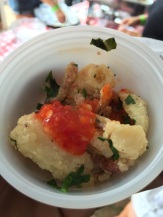 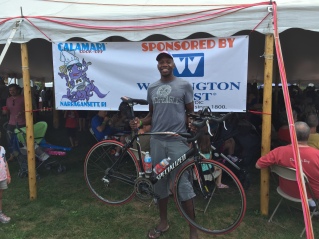 Packet pickup was followed by an hour race briefing by the race director. The organizers did a great job prepping us for the event given their limited resources. A race that earlier before had a larger field size of roughly 600 has dwindled to a few hundred at best. Competitors are surely saturating the sport.

Maybe I should be scratching my head for this swim

Making the mile or so walk to the race start the swells from the ocean looked unrelenting. I wasn’t taking this in too much because I knew the toughest part of the swim would be making my way out to the first buoy given the rough waves. This would turn out to be way tougher than I imagined. Again I haven’t practiced any open ocean run starts lately especially in such conditions (similar would be Rockaway beach, NY on a windy day). On each attempt to start freestyle swimming I was engulfed in a huge swell. Almost immediately after countless attempts the thoughts of a possible DNF (did not finish) was crossing my mind. It wasn’t thoughts of panic or such but the 1.2 mile swim doing breaststroke would be extremely exhausting. I took as much time as needed to evaluate the situation and my swim options while treading water and doing minimal progress. My short term goal was freestyle, then mix in some breaststroke until some sort of normality posed itself. This strategy would really be helpful as I started to make actual progress on the swim course. Freestyle stroke was becoming more prevalent than breast at that time. What helped tremendously was when swimmers in the pink wave came by. I was able to tag along and sight off them without breaking my swim flow too much. I would only see the occasional blue cap that I started with at 7am. Great! I could now see the huge neon turn buoy which signaled turning to shore for the swim finish. At this point my swim technique and freestyle stroke all came together. I was able to really dig and finish the swim as strong as possible. Afterward I saw one of the race organizers who said those were the worst swim conditions in the race 20 year history.

There was a small trench in the water that the volunteers made us aware of heading out of the water. The run to transition was pretty short. Made sure to put my socks on in prep for the run afterward. Helmet and glasses, salt and a 2nd spare tube in my jersey.

I saw Anh and our son Miles as on the swim and  waved to them as I headed out. The winds were to be 18-20 mph for the duration of our outward ride which makes up about 2/3 of the course. With a southwesterly wind direction that would make for a terrible headwind. As stated my bike fitness heading into this race has been great. The course and road surface was perfect. I’ve never raced on an open road course before but I’m use to it in training as is the norm. However looking out for merging traffic on a highway is new during a race. The course takes us on Route 1 where traffic is open in either direction. So after surviving the swim I needed to play close attention to the traffic as well. Not a deal breaker, it just kept me focus on the course and my bike. I made sure to keep taking nutrition in because as always this is the second leg of the race, still a half marathon to go. Heading back into Narragansett town beach there was a tailwind as promised by the forecast. I made sure to keep my pedal stoke as efficient as possible pushing a bigger gear at 82-85 rpm. Higher rpm on up hills 90+. I finished the bike in 2 hours 53 minutes. Quite happy with that split, 2nd in my age group, booyah!

I made sure to grab my gel for the run. Took my fuel belt, race belt and visor and headed out.

With my lack of run volume I knew I would not be capable of getting the normal high 1:40s run split I normally get at a half. So the main goal was to maintain an easy MAF (aerobic) pace straight out and hold until I felt any better or could push a bit more appstore.com/stayaerobic. Thankfully I choose this race as opposed to Williamsburg because even with temps in the upper 70s, it still felt hot out there. At every community aided water station I made sure to pour water on my head to cool my core temp. Thankfully the weather would play into our hand on the run when a drizzle started which was much needed. This really helped. At mile 9 my knees and technique felt better and I was able to push a bit. I started picking out and passing some runners along the way. Finished off at 2 hours flat. Couldn’t have asked for a better finish when I was able to run with Miles across the finish line. My little trooper also placed the finishers medal around his daddy’s neck. Thanks to my son and lovely wife for always being my #1 support crew.

I made sure to pack my fuel belt for this race. Especially with the the fact that it’s a small race. Wanted to make sure to pack my nutrition essentials namely, accelerade with maltodextrin

Would I do this race again? Maybe sometime in the future especially the fact that there’s other activities to do around Rhode Island. Such as the last day in RI we toured Newport. Which is filled with historical monumental mansions and the ocean scenery is breathtaking. There is a cliff walk along the ocean that’s a must do for anyone. On the day we were just plain limited with time and did a quick drive through.

The race director iterated post race that this was by far the harshest swim conditions in the race’s 20 year history. So I have to feel quite content with my 50 minute performance as compared to the better swimmers at 40 or so minutes.

How is my fitness and performance? My training and performance couldn’t have been better correlated. All three were on point with my training and lack of. Heading into winter IRONMAN training I know the key points that will need addressing especially knee strength appstore.com/kneefit for my run fitness. 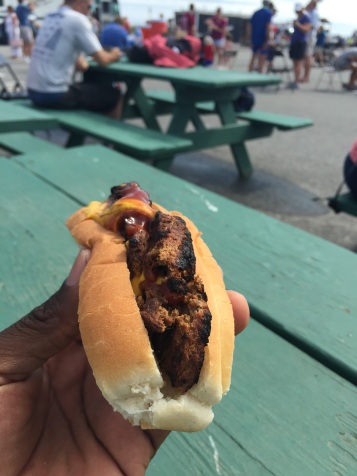 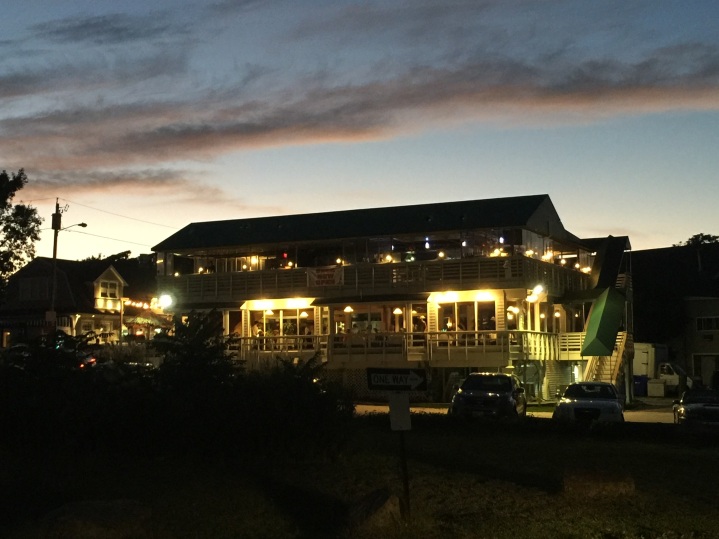