Haven’t been doing too much open water swims, so I was looking forward to gauging my swim fitness and gear with this race. I choose to wear my wetsuit even if the water temperature was 72 degrees to get more use to it. I was placed in wave #1 as a result of my swim time uploads to NYC Swim website (during the registration process). In retrospect I should’ve moved up 1 or 2 waves. The swim took place on the West side of Randalls Island. The venue for the Stars & Stripes Aquathlon had previously been Riverside Park, but was moved to Randalls Island this year. We live in Astoria so, Anh and I decided to take the train to Astoria Blvd and walk over the Triborough bridge to Randalls Island. The walk was a bit over 2 miles. This made for a good warmup.

It was an in water start. Most of the swimmers in my wave were not wearing wetsuits. This was a definite indication that I was in the wrong class. During the beginning of the swim I was just trying to catch my stroke and warmup. My sighting was off and I continued to struggle with my goggles fogging up and me trying to stay in the pack. I was quickly chased down by the second wave. I stopped and tightened my goggles to fix the problem. It worked at first but fogged up again. This is a new pair of goggles I recently purchased and was expected a better performance from it. May have to ditch those and experiment with a different pair. Also I continue to feel constrained with my full wetsuit. I have been contemplating purchasing a sleeveless and may have to after all. With my 2.4 mile Ironman swim coming up in 2 weeks I need to be as comfortable in the wetsuit as possible.

Transitioned to the run quickly and immediately pushed the pace. I passed quite a few runners along the way. The course was very scenic. We got a view of Astoria on the first half and Manhattan on the latter part. There was about 2 inclines on the course just kept pushing through. It was a 5K run so kept the pace anaerobic to the end. This was a great workout since I missed my speed session this week. I wished I had packed some gatorade for the run. I always feel the need for some electrolytes with run efforts like these. Towards the end I tried to push the pace up one more notch to pass a fellow runner, but apparently there weren’t any gears left so I cruised to the finish. I met up with him at the end and funny enough he is also training for Lake Placid. This will be his 10th Anniversary of his first Ironman Lake Placid race. Also met up with Cory at the race.

Great event and I’m looking forward to next year. Thanks to my wonderful wife, Anh for her continued support and taking some beautiful race pics. 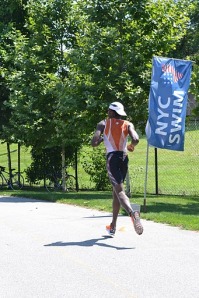 Thumbs up to my sweetheart 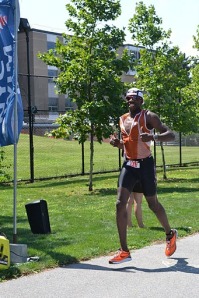 Spectator made sure to hi-5 me this time around 🙂

Showing off the bling

Posing with Vince and Julia 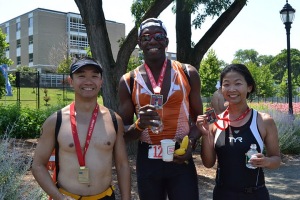 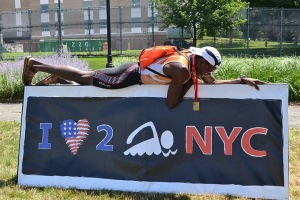 4th in my Age Group