Our commute to Montauk was via the Long Island Rail Road. The train to Montauk has very strict bike restrictions. Only four bikes are allowed on the train, two up front and two at the back. Also bikes are only allowed on off-peak trains. This meant that we needed to catch an earlier train on Friday which meant we left early from work. The entire commute took about three hours from Penn Station, NYC to Montauk, Long Island.

The weather forecast for race day Saturday was not looking favorable throughout the week. Conditions from Tropical Storm Andrea would bring torrential rainfall, flooding and heavy winds to Montauk. Upon arrival to Montauk on Friday evening the rain was very heavy. The race director and forecast called for a calming of the storm and rain in time for the swim start. This prediction came to be 100% accurate.

The Swim: (1 mile) 38:46 minutes
According to the Mighty Montauk race website water temperatures are usually in the high 50s to low 60s. So I knew it would be the coldest triathlon swim I’ve done. However I haven’t done major cold water swim training for the season or to the fact since I’ve commenced triathlon racing in 2009. I opted to wear my sleeveless wetsuit because presently that’s what I feel more comfortable in. Since my last panic attack a few years ago in my fullsuit I haven’t worn it. Also it may be time I tried and experimented with a new fullsuit as my current one is a size too small. Montauk is coastal and have colder temperatures compared to New York City. My assigned wave was #4, 30-34 age group. There wasn’t a huge amount of time slated for a warmup so I took a few minutes before our wave started to have a feel for the water. COLD as ice was the feeling. After a 5 second countdown my wave started. For the first quarter mile I felt okay. However about 100 meters before the turnaround I became very cold and did not seem to be warming up, on the contrary I was cooling down and my wetsuit became a bit constricting. A bit of panic crept in. Thoughts of quitting (dnf’ing) the race was getting in my head. I took a breather, treaded water for a while and did some breaststroke. That seemed to be working out perfectly as I was making progress to the turnaround buoy. As I hit the halfway buoy and began making my way back to shore I felt way better than I did earlier. I was able to fall in a swim rhythm and pick up the pace considerably. I finished the swim a disappointing 38 minutes. I was hoping for 30 minutes or so. I saw ,Anh, and our son, Miles, at the shore and off I went to T1 to get my bike. The water was so cold that I did not feel the sole of my feet while running barefeet to transition. Water temperature was 59 degrees.

Due to the sogginess of the transition area from the storm I opted to keep all my shoes off the ground. My bike shoes I placed on the bottles of my bike and my running shoes I placed and tied in a plastic bag on the bike rack.

Wetsuit off and helmet on I made my way out of transition. The skies at this point were fortunately clearing up. I found my bike legs quite quickly and went into hammering mode. I didn’t pay close attention to my Garmin, I merely relied on my perceived effort to get me through the bike. At short distances like this race I attempt to push as hard as possible while still saving a bit for the run without relying on my Garmin data. My nutrition was a mixture of accelerade and carbo gain (maltodextrin) in one bottle and water in the next. I also packed 3 powergels if I needed a bit more. On the day I would only have consumed the mixed bottle. It may have been due to the weather not being as humid or hot. The cross winds on the bike were tough as expected, the weather called for 30 mph gusts. I held aero for as much as I could. There were a few hills as well. The course was very scenic as it took us by the Montauk lighthouse and ocean front.

The Run: (6.2 miles) 44:47 minutes (7:13/mile)
Right out of T2 I knew my legs would lead me to a great run. They felt quite fresh, this may be due to a well executed bike leg. I kicked into a high pace tempo immediately. I held a powergel in my hand as I knew there wouldn’t be any Gatorade or electrolytes on the course. The race was only serving water on the run course. As promised the run also had some nice challenging hills. There were about three out and backs, going out was downhill and exiting was an uphill. My race strategy was to allow gravity to do its work on the downhills and push on the uphills. I kept feeling in great control on the run. With a mile or more to the finish I came up to a fellow competitor who seemed to be running slightly faster at the moment. He suggested we team up and push each other to the finish. This is exactly what we did. We pretty much ran stride for stride rocking the same neon green saucony kinvaras with great acknowledgment. Again I felt great while not overexerting my effort. We gave the spectators a nice sprint finish.

Huge kudos to the race organizers and volunteers of the Mighty Montauk Triathlon. They kept reassuring us that the weather would get better and the day would be perfect. Indeed it was. There were enough refreshments at the finish to replenish us and also a post race BBQ party at the awards ceremony.

Yours truly also won second place in the Clydesdale division with an overall time of 2:29:50.

Sprint finish to top it off 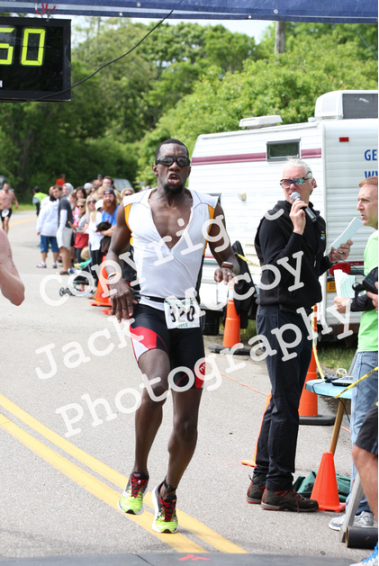 My thoughts on the race was that I raced the best my training would allow on the bike and run, but I wasn’t quite ready or prepared for the cold water swim as I thought I would be. I am surely looking forward to participating in a next tri on Montauk again in the future as the roads and course made for great racing. With this being my first tri for the season and three more to go with the aim of breaking 5 hours in the Half Iron distance much more effort needs to be allocated to open water swimming. For the past 5 years of active tri racing I’ve never been able to completely race the swim past a Sprint distance. More practice with a wetsuit in race simulation scenarios and pacing strategy needs to be added to my training.

Great thanks and hugs to Anh for the support she and baby Miles gave me throughout the race. I promise more smiles next time 🙂

Last day of school 🏫 🙌🏾….summer 🏖
Let’s #goachilles #nyrr
Today was our baby girl’s 👧🏻 big day….so proud of her performance and all the other dancers from @jrds_dream_team 🎭 🩰
Psyched about my first Velodrome experience. 🙌🏾 💨 #kissenavelodrome #velodrome #scottplasma
Today I did my first Velodrome bike ride ever! I choose to do an hour Time Trial holding a moderate effort on the Kissena Velodrome (Flushing, Queens, New York - built in 1963, renovated in 2004) riding my Triathlon bike.
My baby in his first Acting 🎭 role. 🎥 Annie featuring Miles Phan as Lieutenant Ward.